Paula Parore and Clay Darius formed AViiDA in 2014 and since then haven’t looked back. Both accomplished soul, R&B and blues singers, coming together as both a musical and life partnership has taken them on a journey that has given their individual and collective vocal styles a new energy.

A powerhouse duo, the pair have a varied list of local, national, and International performing credits to their name, both on the theatrical and musical stage.

Clay has firmly planted himself as the soul man of Perth who delivers an authentic, exciting, and soulful performance. As a solo or headline act, he entertains across his various live formats and is in demand across private functions, corporate events, and venues across WA regions.

As an actor/performer, he has worked extensively on the theatre stage performing major roles in productions like Jesus Christ Superstar; Joseph, The Amazing Technicolor Dreamcoat; Audrey 2, Little Shop of Horrors, and more recently We Will Rock You, Cats, and The Little Mermaid. Clay’s vocals are warm and soulful, and his performances always invite a crowd on a powerful but personal journey.

Paula Parore is a songstress and diva in her own right, with a voice that has drawn praise and love all over the territory. As a live performer her highlights include supporting Toni Childs, performing at the All Blacks, Ch7’s Perth Telethon, and being featured on The Voice Australia, winning a place on Team Seal in 2012, before returning in 2015 with the newly formed AViiDA.

Over the years, Paula has earnt a reputation for her strong work ethic, and professionalism. Her vocals emit power and emotion, with conviction and connection part of her delivery.

Her recent stage credits include A Saucy Little Secret in the role of the Blues – Ma Rainey  and more recently lead roles in WA’s ‘We Will Rock You, CATS The Musical, and Pop Opera: Bare.

Over the last 3 years, AViiDA have created and produced successful concerts, notably; A Night of Respect & Wonder, which sold out Ellington Jazz Club, Leapfrogs, Woodvale Tavern, was nominated in the Perth Fringe Festival Awards, and crossed into VIC borders with a special performance at Melbourne’s Chapel off Chapel.

They have also performed and toured with other great concert productions including ‘Rumour Has It (Naomi Price), Bloom Sings: Amy & Adele (Bloom), and The Karen Carpenter Show (Johnny Young/Narelle Belle) to name a few.

Currently, they both regularly perform in great Perth venues and theatres, including the Ellington Jazz Club, Duke on George, and Leapfrogs. They are constantly in high demand for Corporate Events across Australia and New Zealand, with no sign of stopping anytime soon. 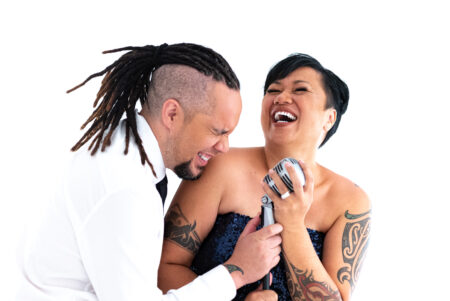